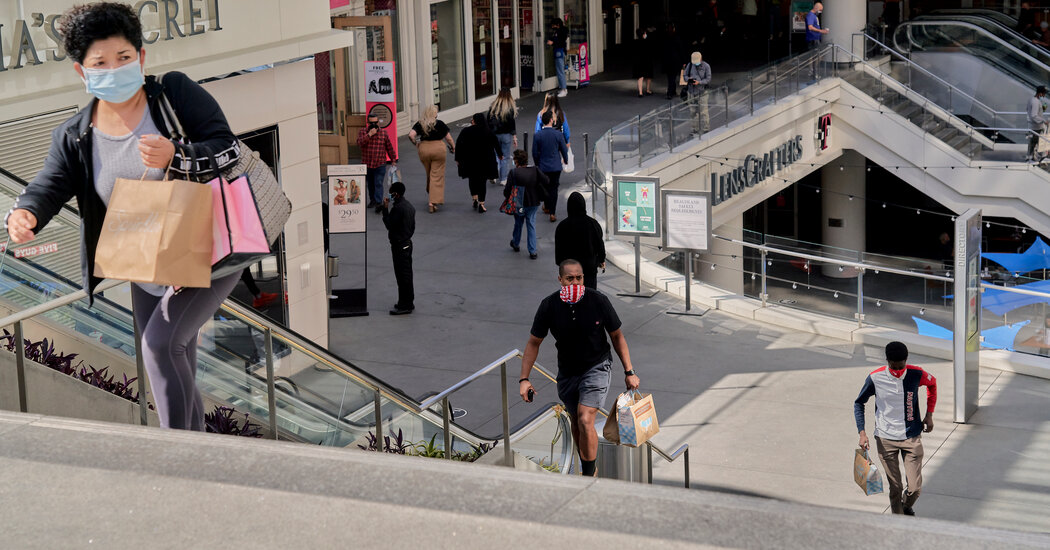 The American economic recovery came perilously close to falling off a cliff at the end of last year. But government aid arrived just in time to prevent a disaster — and possibly paved the way for a dynamic rebound.

Personal income surged a remarkable 10 percent in January, the Commerce Department reported on Friday. Spending increased last month, too, by a healthy 2.4 percent, largely fueled by a rise in purchases of goods.

The report was the latest sign of the economy’s slow but steady march forward after a series of setbacks.

Yet the data also underscored the extent to which government aid is buoying the economy. The rise in income last month was almost entirely attributable to the $600 government relief checks approved in December and to unemployment insurance payments. And while spending ticked up, purchases of services remained depressed as the pandemic continued to weigh heavily on the leisure and hospitality industries even as coronavirus cases fell.

“Technically, you could say we’re recovering,” said Diane Swonk, chief economist for the accounting firm Grant Thornton. “But the patterns in both income and spending point out the fragility of the recovery without aid to bridge these waters that are poisonous.”

That the economy remains reliant on government aid is all the more resonant as Democrats in Washington try to push through President Biden’s $1.9 trillion relief measure, which would provide a round of $1,400 checks that could further power consumer spending.

Although the data on Friday indicated that the recovery was still fragile, it provided fresh evidence that it was no longer in danger of moving in reverse, a trend also seen in recent reports on retail sales and orders of durable goods.

Yields on government bonds, the basis for mortgage rates and corporate borrowing, have risen sharply this month as investors anticipate a quick pickup in growth. Yields on 10-year Treasury notes, below 1 percent for much of 2020, have climbed to roughly 1.5 percent in recent days.

The encouraging data led Morgan Stanley on Friday to raise its forecast of first-quarter economic growth to 2 percent (8.1 percent on an annualized basis) from 1.8 percent. Before Congress passed the round of aid that produced the January checks, many economists thought G.D.P. might shrink in the first quarter.

There is a possible downside to a robust, stimulus-powered recovery. Some economists have warned in recent weeks that inflation could become a problem, which could prompt the Federal Reserve to cut back on its measures to bolster the economy. A change of posture from the Fed would probably be seen as bad news for stocks, and trading on Wall Street has been turbulent this week as investors react to the sudden moves in bond yields.

But the report on Friday gave no indication that inflation was spinning out of control. Consumer prices were up 1.5 percent in January from a year earlier, well below the Fed’s 2 percent target.

On Thursday, John C. Williams, the president of the Federal Reserve Bank of New York, said he felt that a recovery could be achieved without inflationary worries.

“Fiscal support, combined with highly favorable financial conditions and steady progress on vaccinations, are all reasons to be optimistic the economy will experience a strong recovery this year,” he said in a speech. “With our economy and the global economy still far below full strength, I expect underlying inflationary pressures to remain subdued for some time.”

The January data from the Commerce Department showed that although income was up 10 percent over all, wages rose only 0.7 percent. And spending reflected the pandemic’s disruption to consumer behavior. Money spent on goods rose 5.8 percent, while spending on services was up only 0.7 percent.

There was a cautionary note on Friday from the University of Michigan’s February index of consumer sentiment, which declined from the previous month. The report said economic expectations had diminished particularly among households making less than $75,000.

“The worst of the pandemic may be nearing its end,” the survey’s chief economist, Richard Curtin, said in announcing the results, “but few consumers anticipate the type of persistent and robust economic growth that restores employment conditions to the very positive pre-pandemic levels.”

A fresh snapshot of the labor market — another instrumental piece of the economic recovery — will come next week when the Labor Department releases its monthly jobs report. In January, employers added only 49,000 jobs, hardly making a dent in the nearly 10 million jobs that remain lost.

Still, many economists are now predicting a rebound that is stronger than once seemed possible, a view that the Commerce Department report on Friday bolstered.

Jay Bryson, chief economist for Wells Fargo, said the buildup in saving last year — a combined effect of government aid and spending reductions because of the pandemic — could prompt Americans to spend more in the months ahead.

“People were getting all this money, and they had no place to spend it because the economy was shut down,” he said. “So what did they do? They literally put it in the bank.”

The Commerce Department report showed that households had $3.9 trillion in savings in January, up from $2.3 trillion in December and $1.4 trillion last February, before the pandemic. The jump in personal income in January was the largest since April, when the figure rose 12.4 percent, lifted by nearly $3 trillion in government transfer payments. That was mostly in the form of $1,200 checks that millions of households received from the federal government.

That cash stockpile will grow even larger if Congress passes another round of aid, as now seems probable. But as the pandemic ebbs, Americans are likely to start spending again — turning the built-up savings into fuel for the economy.

“We just think there’s going to be this huge pent-up demand for services that’s going to be funded by that excess savings,” Mr. Bryson said.

Not all the government aid is being saved. Retail sales surged in January, a sign that some Americans were spending the money. Some of that spending might have been on essentials, as unemployed workers refilled pantries after weeks with little help. But some of it may also reflect the gradual reopening of the American economy, even as the pandemic continues.

“We’ve learned to deal with this thing in the last year,” Mr. Bryson said.

The year ahead could be bumpy, with consumer spending gradually warming up in the spring and summer as the combination of a new round of stimulus, reduced infections and vaccine distribution gets people and their money into greater circulation, said Gregory Daco, chief U.S. economist at Oxford Economics.

“We know what is restraining consumer spending,” he said — namely the health crisis and, for some families, the means. “And what the January report reveals is that if both of these factors are alleviated in terms of constraints, then consumers will spend, and then the recovery will be strong.”