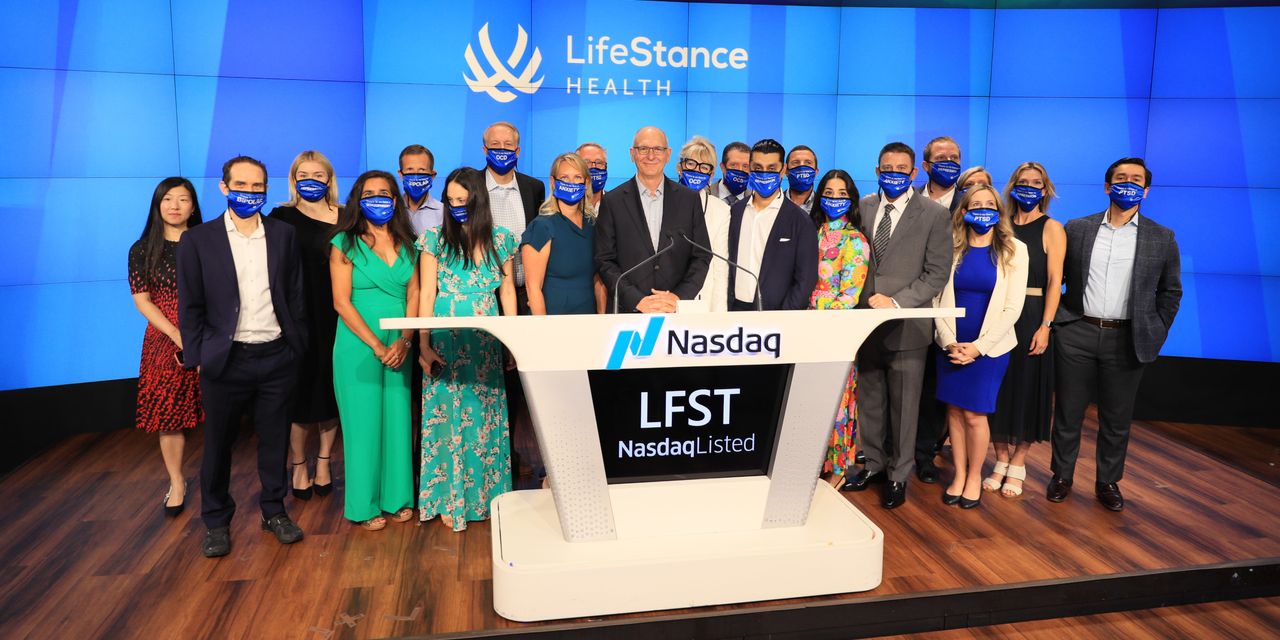 Group, which made its public equities market debut Thursday, is looking to improve the mental health of consumers across the U.S.

Founded in 2015, LifeStance Health (ticker: LFST) is an outpatient provider of mental healthcare services. It employs more than 3,300 licensed mental health clinicians, including psychologists, psychiatrists, and therapists, through its 370 centers. In 2019, more than 51 million people in the U.S. were diagnosed with a mental illness, the prospectus said. Many couldn’t access or afford care.

“Mental illness is the next pandemic post-Covid,” said Mike Lester, LifeStance CEO, who spoke to Barron’s from the Nasdaq.

LifeStance is looking to change that. Consumers can use the phone to call LifeStance, or visit the company’s website, to find providers in their home state that accept insurance. LifeStance offers in-person or telehealth visits for mental health issues like depression, bipolar disorders, sleep issues, and loneliness.

Before the Covid-19 pandemic, video visits at LifeStance numbered about 350 a week. That jumped to about 60,000 telehealth visits each week in 2020, Lester said. Covid-19 forced LifeStance to build a hybrid in-person/telehealth model in a much shorter time frame than they had planned, he said. The move gained LifeStance much loyalty from clinicians who couldn’t build the telehealth model on their own, he said. “We still have a [patient] waiting list for all 3,000 clinicians,” he said.

LifeStance is currently in 27 states and plans to be nationwide, he said. The company typically opens a new center, which usually houses 12 clinicians, every 4.5 days, Lester said.

On Thursday, LifeStance listed its stock on the Nasdaq. Shares kicked off at $20, hit a high of $21.56, and closed Thursday at $21.90, up nearly 22% from its initial public offering price.

LifeStance raised $720 million with its IPO after selling 40 million shares at $18 each. It plans to use proceeds to launch more centers, build out its technology, and to pay down debt, Lester said. LifeStance’s leverage will drop to three times debt to Ebitda (earnings before interest, taxes, depreciation, and amortization) from its current seven times debt to Ebitda, he said. The company also plans to give about $10 million to the LifesStance Foundation, a nonprofit that focuses on youth mental health, and the mental health of underrepresented minority communities, the underemployed, and the uninsured, Lester said.

LifeStance expects to remain acquisitive, the CEO said. The company buys one clinician practice a month on average, he said. Since its founding in 2017, LifeStance has opened 120 new centers, hired 1,746 clinicians, and completed 53 acquisitions of existing practices, a spokeswoman said.

Lester is the former CEO of Accelecare, a provider of wound care services that was sold to Healogics in 2015. Accelecare was backed by private-equity firms Summit Partners and Silversmith Capital Partners, which are also investors, along with TPG, of LifeStance. The three firms sold a combined 7.2 million of LifeStance shares, and will own a combined 64.6% of LifeStance after the IPO, the prospectus said.

(MNDY) also began trading Thursday, with shares rising 15%. Founded in 2012, the Israeli company provides workforce collaboration software that it says is used by 38% of the Fortune 500. “We felt it was the time to take it to the next level,” said Eliran Glazer, Monday.com chief financial officer. “For us, [the IPO] is just a milestone. We want to be bigger.”

Monday.com will seek to hire top talent not only in Israel and the U.S., but globally, he said. The company’s IPO raised $573.5 million after selling 3.7 million shares at $155 each, above its price range of $125 to $140 a share. It plans to use proceeds to “innovate and introduce additional product solutions,” Glazer said. Acquisitions, however, aren’t part of its plans. However, if an interesting opportunity came up, Monday.com would consider it, he said. “Never say never,” Glazer said.

He also explained why Monday.com priced its shares at $155, which is much higher than companies going public typically sell their stock. Monday.com could’ve sold its stock at an even higher price but decided not to, the CFO said. It wanted to stay in a range that would benefit its investors, he said. “We are building relationships for the future,” Glazer said. “We wanted our long-term investors to stay with us and make money.”