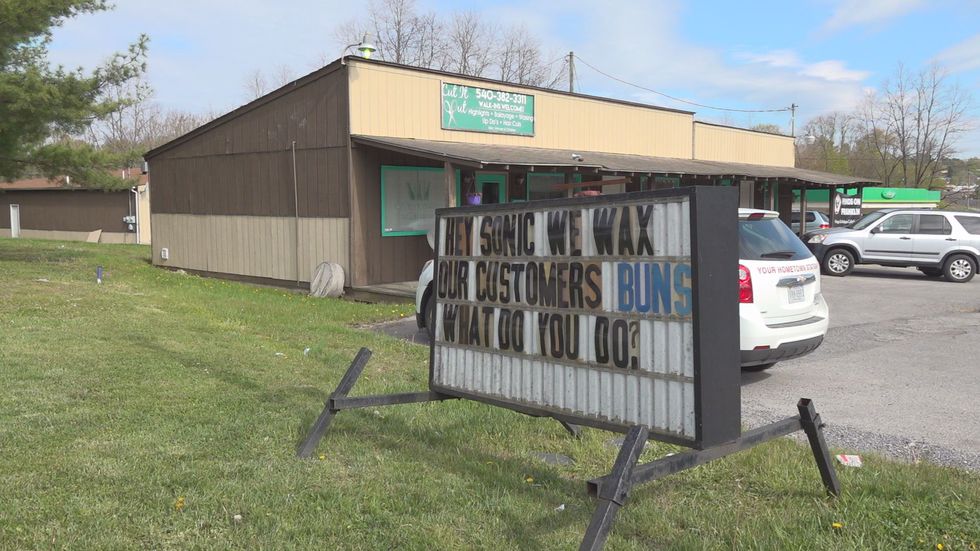 CHRISTIANSBURG, Va. (WDBJ) – It is a war that’s grabbing worldwide attention — and it just keeps getting bigger.

The Christiansburg Sign War started as a friendly business sign competition. The first two businesses to fire the first shots were a music and shoe store that inspired others to get into the game.

Now, more than 13,000 people on Facebook are sitting on the edge of their seats to see what businesses will post next.

“It was just kind of on a whim,” Bohon said. “I put it up one day, three or four days went by and they didn’t respond. I kind of thought maybe their corporate wouldn’t allow them to do it, but they put it up one day, and as soon as I left work that day, I got on my phone and I was starting the attack and so from Facebook. The next day it just went crazy.”

Super Shoes responded: “Our shoe strings are stronger than your guitar strings.” Launching the playing field for dozens of businesses around town to get involved with the sign war.

For years, Bohon has been coming up with clever sayings on the music shop’s sign. He never thought it would get this much attention from a simple ask.

“Now I feel like they need to have a jab maybe here or there and some of the other places that are around because I want to make sure that they stay involved as well and they feel connected to [the sign war],” Bohon said.

As businesses started to jump on board, Christiansburg resident Anthony Woodyard saw this as an opportunity.

“I feel it did a really great just to give our community, a platform for local businesses,” Woodyard said.

Woodyard launched a Facebook group that has gone viral — gaining more than 13,000 people in one week.

“I think that the last 14 months have been so isolating for people, I think to have something light-hearted and fun while they’re still safely at home on their computers, their tablets, their phones that they’re able to see what’s happening between these businesses,” Woodyard said. “To see the lively banter has really made people excited about what’s happening.”

Chelsa Stassin, the owner of Cut It Out salon, jumped in on the fun, too. Stassin took a jab at Sonic next door, saying, “We wax our customer’s buns, what do you do?”

Sonic tagged the Pizza Inn down the street to “Come get a slice of this.”

The list goes on and on, as dozens of businesses now have unique sayings outside.

“It feels amazing,” Stassin said. “It’s so funny to think that just being a small business, you could impact somebody with them reading my sign and driving by within a few seconds, it just completely like makes me so happy to see that it just brightens everybody’s day, too.”

It’s a war that has brought peace … connecting the community in a positive way.

“That’s been the biggest thing that just seemed so much positivity you could come out with like a war, so to speak,” Bohon said.

This makes Christiansburg — the next big stop for the next laugh — that is going to drop.

“We’re excited about this we want other people to be excited about it,” Woodyard said. “We just want to be there for our community and that has very quickly become much larger than Christiansburg, Virginia.”

People from other states, including Texas, said they want to come and visit Christiansburg in the Facebook group. Plus, people from all over the world are part of the group that puts smiles on people’s faces.

You’re encouraged to join the Facebook group Christiansburg VA Sign War if you need a chuckle and to keep spreading positivity.