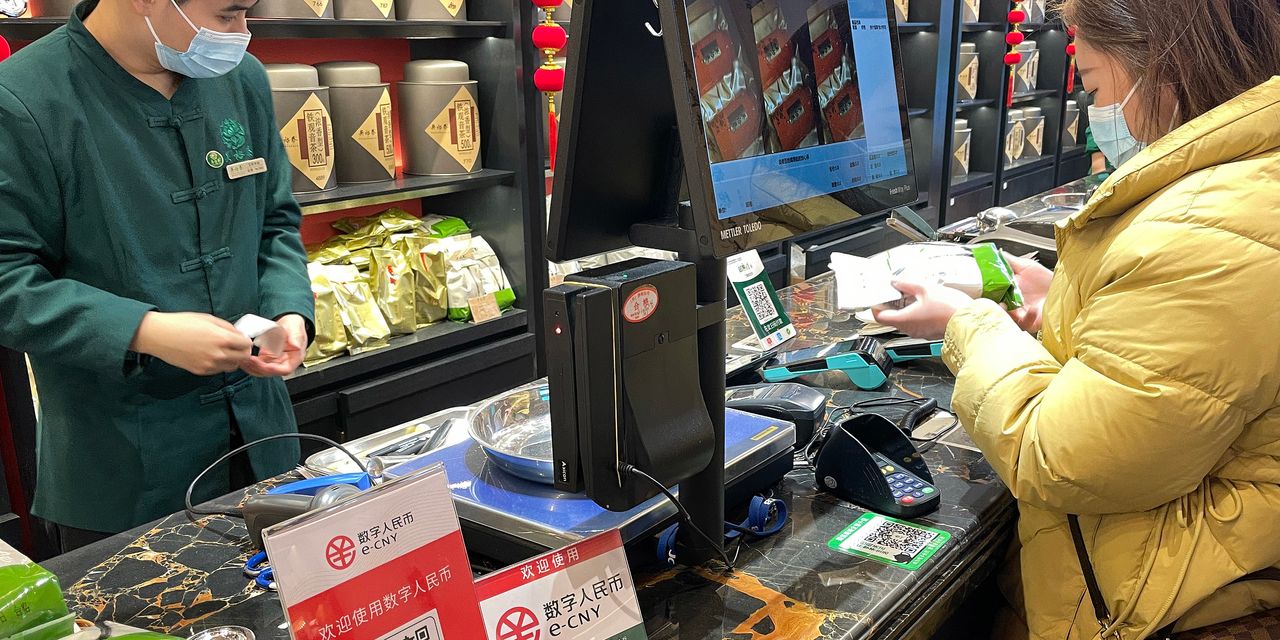 A thousand years ago, when money meant coins, China invented paper currency. Now the Chinese government is minting cash digitally, in a re-imagination of money that could shake a pillar of American power.

It might seem money is already virtual, as credit cards and payment apps such as

Pay in the U.S. and WeChat in China eliminate the need for bills or coins. But those are just ways to move money electronically. China is turning legal tender itself into computer code.

Cryptocurrencies such as bitcoin have foreshadowed a potential digital future for money, though they exist outside the traditional global financial system and aren’t legal tender like cash issued by governments.

China’s version of a digital currency is controlled by its central bank, which will issue the new electronic money. It is expected to give China’s government vast new tools to monitor both its economy and its people. By design, the digital yuan will negate one of bitcoin’s major draws: anonymity for the user.

Beijing is also positioning the digital yuan for international use and designing it to be untethered to the global financial system, where the U.S. dollar has been king since World War II. China is embracing digitization in many forms, including money, in a bid to gain more centralized control while getting a head start on technologies of the future that it regards as up for grabs.

“In order to protect our currency sovereignty and legal currency status, we have to plan ahead,” said

who is shepherding the project at the People’s Bank of China.

Digitized money could reorder the fundamentals of finance the way

That an authoritarian state and U.S. rival has taken the lead to introduce a national digital currency is propelling what was once a wonky topic for cryptocurrency theorists into a point of anxiety in Washington.

Asked in recent weeks how digitized national currencies such as China’s might affect the dollar, Treasury Secretary

have said the issue is being studied in earnest, including whether a digital dollar makes sense someday.

Digitization wouldn’t by itself make the yuan a rival for the dollar in bank-to-bank wire transfers, analysts and economists say. But in its new incarnation, the yuan, also known as the renminbi, could gain traction on the margins of the international financial system.

It would provide options for people in poor countries to transfer money internationally. Even limited international usage could soften the bite of U.S. sanctions, which increasingly are used against Chinese companies or individuals.

The digital yuan resides in cyberspace, available on the owner’s mobile phone—or on a card for the less tech-savvy—and spending it doesn’t strictly require an online connection. It appears on a screen with a silhouette of Mao Zedong, looking just like the paper money.

In tests in recent months, more than 100,000 people in China have downloaded a mobile-phone app from the central bank enabling them to spend small government handouts of digital cash with merchants, including Chinese outlets of

a young woman in Beijing, after spending a test allotment. It took her just an instant to pay for her two-year-old daughter’s birthday portrait by pointing her iPhone toward a scanner. The Chinese Communist Party has also let members settle monthly dues with digital yuan.

China has indicated the digital yuan will circulate alongside bills and coins for some time. Bankers and other analysts say Beijing aims to digitize all of its money eventually. Beijing hasn’t addressed that.

Elements of this kind of control already exist in China, as digital payments have become the norm. Mr. Mu has said the central bank will limit how it tracks individuals, in what he calls “controllable anonymity.”

The money itself is programmable. Beijing has tested expiration dates to encourage users to spend it quickly, for times when the economy needs a jump start.

It’s also trackable, adding another tool to China’s heavy state surveillance. The government deploys hundreds of millions of facial-recognition cameras to monitor its population, sometimes using them to levy fines for activities such as jaywalking. A digital currency would make it possible to both mete out and collect fines as soon as an infraction was detected.

A burst of cash-accumulation in China last year indicates residents’ concern about the central bank’s eye on every transaction.

What about volatility? Cryptocurrencies such as bitcoin are famous for that. But the People’s Bank of China will strictly control the digital yuan to ensure there aren’t valuation differences between it and the paper bills and coins.

That means it won’t make sense for investors and traders to speculate in the digital yuan as some do with cryptocurrencies. Anti-counterfeiting measures will be designed to make it impossible for anyone besides the People’s Bank of China to create new digital yuan.

While China hasn’t published final legislation for the program, the central bank says it may initially impose limits on how much digital yuan individuals can keep on their person, as a way to control how it circulates and provide users a dose of security and privacy.

China’s central bank won’t use the new technology as a way to get more money into circulation, since every yuan issued digitally will essentially cancel one yuan circulating in physical form.

When bitcoin launched in 2009, most nations’ policy makers largely played down its significance. China paid attention.

Always hypervigilant to threats, the leadership feared that a cryptocurrency could undermine government power if people began using it in earnest.

China’s top central banker from 2002 to 2018, has said bitcoin both dazzled and frightened him. In 2014, he launched a formal study for a possible Chinese digital currency.

China hardly looked like a currency pioneer. Its strict government control of the yuan, for instance, ran counter to the rip-roaring trade in other major currencies.

At the same time, a financial-technology revolution was under way in China, with the frenetic adoption of the Alipay and WeChat apps making cash mostly unneeded, and turbocharging startup companies with ways to pay on the go.

said it would pursue its own cryptocurrency. The realization this could circulate in a user base far bigger than any national population brought immediate recognition that technology could upend traditional currencies.

Suddenly, China’s money moves bore watching. Central bankers from the U.S. and other Western economies fret that what Facebook planned with a digital currency could now be done by China, a powerful government.

“There is a sort of Uber fear,” said a senior European central banker who has spoken to Western counterparts, referring to stress on taxi systems when the ride-hailing company arrived in cities around the world. “You don’t want another country’s currency circulating among your citizens,” the banker said.

The U.S., as the issuer of dollars that the world’s more than 21,000 banks need to do business, has long demanded insight into major cross-border currency movements. This gives Washington the ability to freeze individuals and institutions out of the global financial system by barring banks from doing transactions with them, a practice criticized as “dollar weaponization.”

American sanctions on North Korea and Iran for nuclear programs hobble their economies. Swiss banks abandoned their famous secrecy eight years ago to avoid Washington’s wrath in a showdown over taxes. After the February coup in Myanmar, the U.S. used sanctions to block the movement of top military officials’ financial assets through banks. The Treasury’s database of sanctioned individuals and firms—the “Specially Designated Nationals and Blocked Persons List”—touches virtually every nation on earth.

Beijing is especially discomfited by a fast-expanding part of the sanctions register: more than 250 Chinese names, including politicians the U.S. accuses of atrocities against ethnic minorities or of curtailing freedoms in Hong Kong. Sanctions left

China’s top official in Hong Kong, with a stockpile of cash in her home because banks feared that accepting her business would risk exposing them, too, to an American freeze.

The digital yuan could give those the U.S. seeks to penalize a way to exchange money without U.S. knowledge. Exchanges wouldn’t need to use SWIFT, the messaging network that is used in money transfers between commercial banks and that can be monitored by the U.S. government.

The chance to weaken the power of American sanctions is central to Beijing’s marketing of the digital yuan and to its efforts to internationalize the yuan more generally. Speaking at a forum last month, China’s Mr. Mu, the central bank official, repeatedly said the digital yuan is aimed at protecting China’s “monetary sovereignty,” including by offsetting global use of the dollar.

In a 2019 war game at Harvard University, veteran U.S. policy makers scrambled to craft a response to a nuclear-missile development by North Korea secretly funded with digital yuan. Because of the currency’s power to undercut sanctions, the participants, including several who are now in the Biden administration, deemed it more threatening than the warhead.

a longtime American diplomat and favorite to be ambassador in Beijing, told the group, “The Chinese have created a problem for us by taking away our sanctions leverage.”

As China’s marketing for the digital yuan kicks into high gear, an English-language animation circulated online by state broadcaster CGTN shows a man in an American-flag shirt knocked out by a golden coin depicting digital yuan.

A video from China’s state media explains the digital yuan

“This is one of the building blocks of China’s move toward world market status and greater involvement in setting the framework of the global economy,” the narrator says.

Unlike electronic transactions today, the digital yuan is designed to move from A to B instantaneously, at least in theory removing a way banks and financial apps profit off fees and brief built-in delays in such handoffs. The only necessary middleman is the central bank. Mr. Mu has said the digital yuan, because it is state-backed, will reduce risks to the financial system posed by China’s dominant payment platforms that are private companies.

When a global TV audience turns its attention to skaters and bobsledders in Beijing’s Winter Olympics next February, authorities are expected to give visiting athletes digital yuan to spend while they are in the spotlight, an indication of ambitions that stretch beyond China’s shores.

Beijing has joined an initiative to develop protocols for the cross-border use of digital currencies, working with the Bank for International Settlements and the central banks of Hong Kong, Thailand and the United Arab Emirates.

China’s digital strides draw attention to how the U.S. needs to modernize its own financial infrastructure, according to

a former Fed governor now at Stanford University’s Hoover Institution. “If we wait 5 or 10 years, we may well end up with some very bad policy choices,” he said.

More than 60 countries are at some stage of studying or developing a digital currency, according to research group CBDC Tracker. Digital currencies hold some of their biggest potential for the 1.7 billion people globally who the World Bank says lack a bank account. The Bahamas has already issued a digital currency to address financially underserved populations. Some central banks say such currencies would come in handy for families of migrant laborers who make tiny fund transfers that are cumbersome and expensive.

What long-term implications do you think a digital yuan might have? Join the conversation below.

The senior European central banker noted that international person-to-person money transfers can take days and worried that speed and efficiency could eventually make the digital yuan a preferred currency for remittances as countries deepen financial ties with China.

China, with a working model, is offering a ready way for managing digital cash. President Xi last year called for China to seize opportunities to set international rules for digital currencies, much as Beijing has sought to influence and dominate an array of advanced-technology standards such as for 5G telecommunications, driverless cars and facial recognition.

Asked during a recent Senate appearance whether the dollar could be digitized to help the U.S. defend its supremacy, the Fed’s Mr. Powell said researching that question is a “very high-priority project.”

—Grace Zhu contributed to this article. 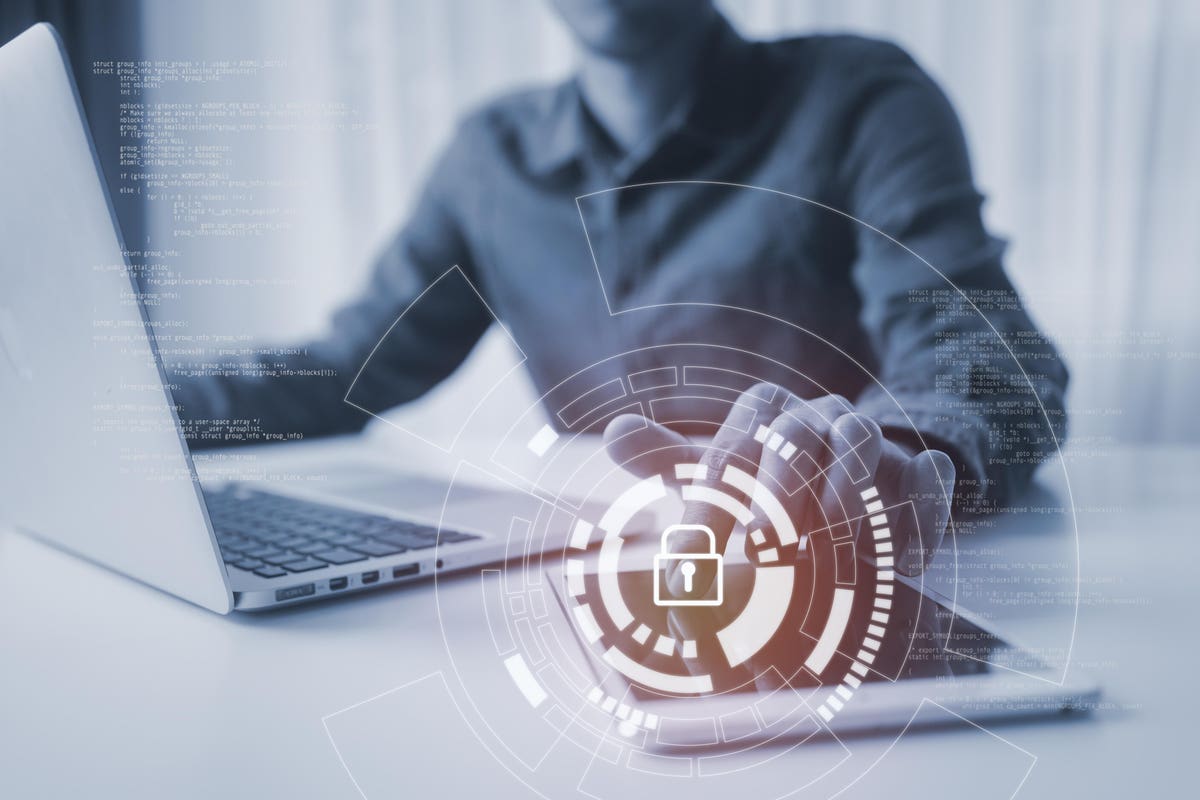